The outside through the walls or roof, it is possible to use the 150/

125 mm reduction flange provided. In this case the hood will be slightly more noisy.

When installing the hood, make sure you respect the following minimum distance from the top edge of the cooking hob/ring electric cookers gas cookers coal and oil cookers

The national decree on fuel-burning systems specifies a maximum depression of 0.04 bar in such rooms.

It is advisable to apply for authorization from the relevant controlling authority when connecting the outlet to an unused chimney flue or combustion gas duct.

The air outlet installation must comply with the regulations laid down by the relevant authorities.

When the unit is used in its extractor version, a sufficiently large ventilation hole must be provided, with dimensions that are approximately the same as the outlet hole.

National and regional building regulations impose a number of restrictions on using hoods and fuel-burning appliances connected to a chimney, such as coal or oil room-heaters and gas fires, in the same room.

Hoods can only be used safely with appliances connected to a chimney if the room and/or flat (air/environment combination) is ventilated from outside using a suitable ventilation hole approximately 500-600 cm2 large to avoid the possibility of a depression being created during operation of the hood.

If you have any doubts, contact the relevant controlling authority or building inspectors office.

Since the rule for rooms with fuel burning appliances is outlet hole of the same size as the ventilation hole, a hole of 500-600 cm2, which is to say a larger hole, could reduce the performance of the extractor hood.

If the hood is used in its filtering function, it will operate simply and safely in the above conditions without the need for any of the aforementioned measures.

When the hood is used in its extractor function, the following rules must be followed to obtain optimal operation:

keep bends in outlet hose to a minimum

never install the hoses with an acute angle, they must always follow a gentle curve only

keep the hose as large as possible (preferably the same diameter as the outlet hole).

Failure to observe these basic rules will drastically reduce the performance and increase the noise levels of the extractor hood.

The hood is supplied as an extractor unit and can also be used with a filtering function by fitting one activated carbon filter (special accessory).

The air is discharged to the outside through a pipe, which must be fitted to connection flange A. Fig. 1.

In order to obtain the best performance the h 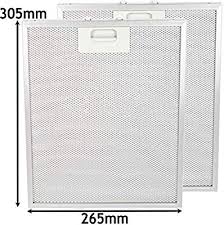